Yelp is a website I’ve been using for the past few years. It started, as it probably does for many people, as a way for me to check reviews for different business. Eventually I began posting my own reviews, interacting with Yelp members on the website, and attending Yelp events in the community. I’ve been a Yelp Elite for the last three years, and since joining Yelp I have discovered some great local spots in Edmonton, and I’ve met some pretty cool people on the way, people like Jennie Marshall. Jennie is the current Community Manager (CM) for Yelp Edmonton. Since I know the CM works with businesses, as well with the local media I thought I would ask Jennie a few questions about her experience with media relations.

Hi Jennie. Could you introduce yourself, and let us know what your job is as a Yelp Community Manager?

Hello, I’m Jennie Marshall and I am extremely proud to be the Community Manager of Yelp in Edmonton. I like to think of a Yelp Community Manager as the “Mayor” of our particular city. We’re the friend that knows when a new restaurant opens, which shoe guy to use for your favorite stilettos, or where to take your Grandmother for an authentic meal that reminds her of the Old Country. I also interact with the Yelp community online as well as off, talk with business owners on how they can use the free tools on Yelp, throw super cool events and parties, write a weekly newsletter and much more! 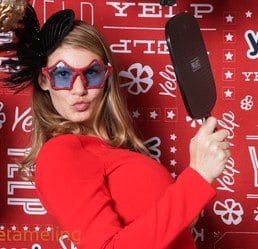 As a Yelp CM what type of work have you done with the local media? Had you done any work with the media before working with Yelp?

I came from a media centered background, which is great help to me in this position. I am familiar with many of the media personalities in this city and have contacts at various radio and television stations from my previous work in television and radio, as well as family and friends I have in the media and press. In every city, the media is a small, closed knit group of people. Often very transient in that there are many people who move from station to station, job to job and city to city as they work through their careers in the media and press fields.

You said that you know a some people who work in the local media. How do you think this has affected any work you do with the media?

Knowing people in the media helps me to get a foot in the door, to be more comfortable about my messaging, and to know who is the appropriate person to speak to. Media personnel are always being asked for time from, which they often have very little of. If they know you, have a relationship with you then they are more likely to give you your 60 seconds to pitch what you need or are asking for at that moment.

Does Yelp have a media kit to send out to media outlets? If there is a media kit what would you consider the “must haves” for it?

Yelp does have a media kit that is ever growing and changing by our PR & media team. As you can imagine, being in 22 countries and counting, in various different languages they do a lot of work to let people know what Yelp is when it is launched in each new and diverse culture and how Yelp is there just to help them, their local business owners and local community.  One thing that is very helpful to have is just a list of contacts for each station in every city… a daunting task as this constantly changes, but we are working on it!

This is very true. I remember not knowing what field I should go into when starting University, I asked one of the head producers at CTV what she took, how she got to be where she was. Her reply was that she took Psychology at a University down east! Not Television & Radio Broadcasting. Having a good education, in many instances in life, is more important than the specific course you were enrolled in.

My best advice (to getting a job) is to make sure you get an internship at a TV, radio, newspaper, PR firm, etc or volunteer. Make yourself known; stand out with out getting in the way. Get to know one person well, then get out to events where more people they work with are and get them to introduce. Remember them, follow up with them, and keep growing your circle of contacts in the media world. People take meetings with and give jobs to people they know. The number one question asked of employee’s of media/broadcasting companies when a position opens is “Whom do you know that we can hire?”

Being a CM for Yelp you represent Yelp, but you also do a lot of work with a local businesses. Do you find that there is any pressure to promote and/or represent local businesses correctly in the media as a Yelp CM?

Yelp is the fastest growing destination for local information. So I feel that the greatest need is just to let people know about local businesses, that they are out there and how much better each community is because of our locally owned businesses. Granted not all business owners are going to understand what Yelp does of course. I am there to try to help them see the good, understand how to use the site and the free tools available to them. I will mention locally owned businesses by name on air, or in print such as Vie’s for Pies, ACME Meat Market or The Press Gallery, but as examples of the wonderful local business out there, not what they specifically represent or do. So no, I do not feel pressure to represent them properly, but to just to get their names out there!

If you were going to appear on a local media outlet what is the most important thing you’d want people to know about Yelp Edmonton?

That Yelp in Edmonton is the fastest growing destination for local information on any business! Yelp is a site that connects people with great local businesses – anything from restaurants, bars and spas to dog groomers, mechanics, even dentists! That the Yelp community is made up of engaged locals who connect online and off to share their opinions about local businesses and that Yelp could not work without our wonderful community of reviewers!

I would want them to know that Edmonton is an amazing city that excites me every day. We are so lucky to have a community of locally owned business that enrich our daily lives and provide us with more then just a meal or a service, they provide us with a treasured lifestyle that makes us all proud to be Edmontonians. And finally, that they have a fearless leader, in me, that loves this city: That was born and raised in this city and is willing and able to be on any National or Global platform and shout through the roof that River City is and always will be the City Of Champions because of the people, places, businesses, heart and soul of every person in YEG!

Thanks you to Jennie Marhsall for doing this interview. You can learn more about Yelp Edmonton here and you can follow Yelp Edmonton on Twitter here.